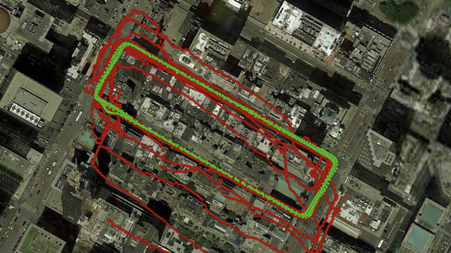 Cohda is delivering unrivalled vehicle positioning accuracy in the most inhospitable of environments for Global Navigation Satellite Systems (GNSS) to operate in – the urban canyons of New York City!

A three-stage, 75-month project, the New York City Connected Vehicle Pilot is a milestone development in the adoption of connected vehicle technology.   It is the largest of its kind in the world, encompassing three distinct areas in the boroughs of Manhattan and Brooklyn and comprising over 3000 vehicles consisting of cars, buses, and fleet vehicles.   Its goal is to reduce the number of fatalities and injuries resulting from traffic crashes through the deployment of connected vehicle technologies that allow vehicles to communicate with each other to extend their perception horizon far beyond that of human capability.

Whilst Cohda’s full Vehicle to Everything (V2X) stack and applications are being applied in the project, it is Cohda’s V2X-Locate positioning solution that is inspiring ultimate confidence in the potential for a connected intelligent transport system to be deployed in city environments, where systems reliant on GNSS operate poorly.   After all, with so many people living and working in and around cities, it is critical that the operational benefits of V2X technology are underpinned by highly accurate vehicle positioning in cities and not just open roads.   Accurate vehicle positioning is a key requirement for the successful deployment of smart transport systems given the nature and complexity of vehicle interactions in a city environment.

The ranges from RSUs are fed into Cohda’s enhanced V2X-Locate positioning engine on board the vehicle to accurately position the vehicle.  Through the advanced processing capabilities of Cohda’s stack, the V2X-Locate solution is able to counteract the impact of non-line-of-sight and multipath signals brought about by tall buildings or underground carparks and tunnels.

Cohda believes that the New York Connected Vehicle Pilot has proven the importance of a connected intelligent transport system and revolutionises road transport as we know it – saving lives and reducing negative impact on the environment.